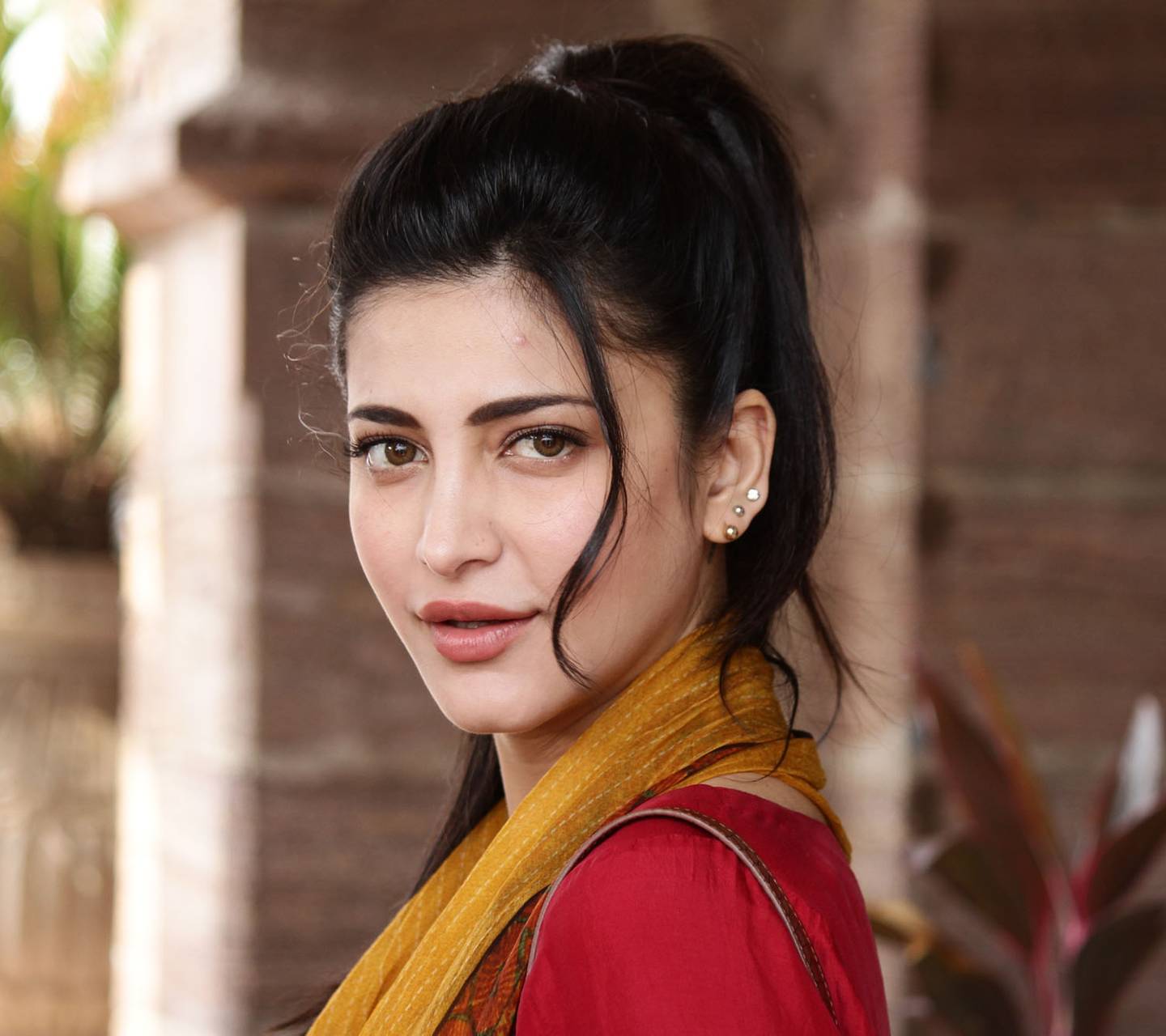 She made her American television debut in 2019 with the action drama series Treadstone in which she had a recurring role.

Shruti Haasan (born 28 January 1986) is an Indian actress and singer who works predominantly in Telugu, Tamil and Hindi-language films. Born in the Haasan family, she is the daughter of actors Kamal Haasan and Sarika Thakur.

Her first release of 2014, the Telugu film Yevadu, opposite Ram Charan Teja, emerged as a major commercial success. Her second Telugu release of the year, Race Gurram, had Haasan star opposite Allu Arjun for the first time in her career. The film was released on 11 April 2014, and eventually emerged as a “blockbuster” success. Along with the rest of the film, Haasan received positive reviews for her performance, with one critic noting that she “plays her part well and looks glamorous”. Haasan also had a Tamil release; Poojai, opposite Vishal, and performed her first item number in her career in the Telugu action comedy film Aagadu, featuring Mahesh Babu and Tamannaah in the lead roles.

Haasan focused on cinema and music, and eventually traveled to the US to continue to learn music at the Musicians Institute in California, before returning to Chennai.

In mid-2010, Shruti was signed by A. R. Murugadoss to star opposite Suriya in his next film 7aum Arivu, and the film’s shooting began in June later that year.
The director signed after he felt she looked the part of the scientist, mentioning that she seemed “intelligent and beautiful”. Shruti played Subha Srinivasan, a young scientist in the film, who hopes to re-activate the genes of 5th century Buddhist monk Bodhidharma, and her performance in the film won appreciation from critics. The film opened to mixed reviews, but became commercially successful. A critic from The Hindu noted: “rarely is a heroine given near-equal footing in Tamil films”, describing her as “ravishing but that she ought to work harder on spontaneity, and fine-tune her Tamil accent”, but concluded “the point is the actor shows promise”. Her next Telugu release was Oh My Friend, a romantic comedy film alongside Siddharth again, which also co-starred Hansika Motwani and Navdeep. The film told the story of childhood friends, and that of their platonic friendship that went on in their adulthood as well, and for the role Shruti Haasan went on to learn the dance of Kuchipudi. The film opened to average reviews with several critics claiming the film evoked a sense of “déjà vu”, though a reviewer noted: “Shruti, on her part displays the same conviction.”

She made her Telugu debut in January 2011, acting opposite Siddharth in the fantasy adventure film Anaganaga O Dheerudu, directed by Prakash Kovelamudi, son of director K. Raghavendra Rao. The film, co-produced by Walt Disney Pictures, saw Shruti play a gypsy with magic healing powers defended by a swordsman, played by Siddharth. The film opened to positive reviews, with her performance being praised with a critic noting: “Shruti looks quite attractive and makes a wonderful screen presence”, while a reviewer from Rediff.com wrote that she “looks beautiful and has a mystical aura about her”.

Shruti Haasan was born to actors Kamal Haasan and Sarika Thakur in Madras (present-day Chennai). Her father is a Tamilian, while her mother Sarika was born to a Maharashtrian father and Rajput mother. Her younger sister Akshara Haasan is also an actress. Actor and lawyer Charuhasan is her uncle. Her cousins are actresses Anu Hasan and Suhasini Maniratnam. Haasan studied at Lady Andal school in Chennai and moved to Mumbai to study psychology at St. Andrew’s College.

Her second Hindi feature film, Madhur Bhandarkar’s romantic comedy Dil Toh Baccha Hai Ji, saw her appear in an extended guest appearance alongside an ensemble cast of Emraan Hashmi, Ajay Devgn and Shazahn Padamsee. The film portrayed her as Nikki Narang, the step-daughter of an ex Miss India model, with Hashmi’s character falling for both mother and daughter. Shruti’s performance gained poor responses from critics with a reviewer citing that her character has been “reduced to post-interval surfacing, last-ditch glamour”, whilst another labelled hers as “so fake that she offers only disappointment”; however, the film went on to become a commercial success at the box office.

As a child artist, Haasan sang in films and appeared in a guest role in her father’s directorial Hey Ram (2000), before making her adult acting debut in the 2009 Bollywood film Luck. She achieved recognition with leading roles in the Telugu romantic comedy Oh My Friend (2011), the Telugu fantasy film Anaganaga O Dheerudu (2011), the Tamil science fiction action film 7aum Arivu (2011). Her roles in the latter two earned her the Filmfare Award for Best Female Debut – South. Haasan went on to establish herself in South Indian cinema with several commercially successful films, including Gabbar Singh (2012), Vedalam (2015), Srimanthudu (2015), and Si3 (2017). She won the Filmfare Award for Best Actress – Telugu for the action comedy Race Gurram (2014). Haasan’s Hindi film roles include the critically acclaimed action thriller film D-Day (2013), Ramaiya Vastavaiya (2013), the action film Gabbar Is Back (2015), and the action comedy Welcome Back (2015).

In 2016 she appeared in Rocky Handsome opposite John Abraham for the second time and in the Telugu film Premam, opposite Naga Chaitanya which was the remake of the Malayalam film Premam. Haasan was signed to the fantasy film Sangamithra, directed by Sundar. C, in which she was to play a warrior. However, citing date issues, she opted out of the film.

Haasan’s first appearance in a feature film was a cameo role as the daughter of Vallabhbhai Patel in the Tamil-Hindi bilingual Hey Ram, based on a murder attempt on Mahatma Gandhi, directed by her father Kamal Haasan. After rejecting prominent film offers, most notably the lead role in Venkat Prabhu’s Saroja, reports suggested in late 2007 that Haasan was set to make her actual acting debut in 2008 with a film opposite Madhavan, directed by Nishikanth Kamat. Entitled Endrendrum Punnagai, the film was stalled before production began.

In 2015, Haasan performed her second item number in the Hindi film Tevar, featuring Arjun Kapoor and Sonakshi Sinha. Next, she appeared in multiple films in such as the Hindi film Gabbar is Back opposite Akshay Kumar, Koratala Siva’s Telugu action film Srimanthudu opposite Mahesh Babu, Anees Bazmee’s comedy Welcome Back, alongside John Abraham, Anil Kapoor and Nana Patekar and the Tamil films Puli, co-starring Vijay and Vedhalam, opposite Ajith Kumar, marking her first collaboration with both the actors.

Aishwarya Dhanush’s directorial debut 3, a romantic drama film co-starring Dhanush, marked a turning point in Haasan’s career. Aishwarya revealed that she had written the script with Shruti Haasan in mind, but date problems meant that the film began its shoot with Amala Paul instead. However, in a turn of events, Shruti was re-signed to play the character of Janani, and the film gained much hype prior to release due to the collaboration of herself and Aishwarya, being the daughters of the two leading contemporary Tamil actors Kamal Haasan and Rajinikanth, as did the success of the song “Why This Kolaveri Di?”. The film opened in March 2012 to positive reviews, with a critic noting: “Shruti Hassan has come a long way”, though the film only garnered average returns at the box office. Her second release in 2012 was Harish Shankar’s Telugu film Gabbar Singh, a remake of the 2010 Hindi film Dabangg, with the version featuring her alongside Pawan Kalyan. She played the role of Bhagyalakshmi, a village girl, which had been played by Sonakshi Sinha in the original version. The film went on to become a major commercial success at the box office and brought in more film offers for Haasan. Critics also gave her performance a favourable verdict citing that she “justifies her role” and “though she didn’t have much of a role, she has left her mark.”

As of January 2021, Haasan has signed on to appear in a cameo role in the Pawan Kalyan starrer Vakeel Saab which is slated to release on April 2021. She is also shooting for the Tamil film Laabam alongside Vijay Sethupathi and the action thriller Salaar opposite Prabhas and will be seen in the Netflix original Pitta Kathalu in Nag Ashwin’s segment titled Xlife.

Haasan eventually signed up to feature in Soham Shah’s Hindi film Luck, opposite Imran Khan, in July 2008, and shot for the film for nearly a year. Imran Khan, her childhood friend, had recommended her name to the director and Haasan signed on after listening to the entire script and accepted to play a dual role in the action film. Shruti took part in action scenes during filming and worked out extensively. The film opened in July 2009 to unanimously poor reviews from critics and took a poor opening at the box office, with critics stating that she “deserved a better launch vehicle”. Reviewers were critical of her performance with Rajeev Masand of IBN stating that she delivers “dialogues with deadpan expressions”, while another critic added that she is perhaps “synthetic and fails to impress”. Haasan then went on to appear alongside Blaaze in the promotional videos for Unnaipol Oruvan and Eenadu, the bilingual films starring her father, which she had composed the music for. She made a further appearance in a promotional video for the horror film Hisss, starring Mallika Sherawat, where she had also sung a song composed by Dave Kushner.

After 3 years of hiatus in Indian films she appeared in 2020 in the short film Devi, the ZEE5 film Yaara opposite Vidyut Jammwal and in the Amazon Prime anthology film Putham Pudhu Kaalai in which she appeared in the segment Coffee, anyone? directed by her cousin Suhasini Maniratnam.

In 2013, she appeared in the Telugu action film Balupu opposite, Ravi Teja, which eventually became a “super-hit” at the Indian box office. Haasan mainly received positive reviews for her performance, with critics noting that she “provides the fun in the film with glamor and verve”. Later that year, Haasan starred in two Hindi films, Prabhu Deva’s Ramaiya Vastavaiya and Nikhil Advani’s D-Day. In the latter, a spy thriller, she played a prostitute involved with a suspended army officer. She also sung a song for the film, entitled “Alvida”. Reviewing the film for Rediff.com, Palomi Sharma found Haasan to be “perfect as a Karachi prostitute with a haunting aura about her”. She also starred in the Telugu action film Ramayya Vasthavayya opposite Jr. NTR for the first time. The film received an average response from critics.

In 2017, she appeared in Katamarayudu, which marked her second collaboration with Pawan Kalyan, Si3, with Suriya, for the second time, and Behen Hogi Teri alongside Rajkummar Rao.

In 2021, she appeared in the Telugu action film Krack opposite Ravi Teja for the second time after their 2013 film Balupu. She also worked opposite Vidyut Jammwal in the Mahesh Manjrekar film The Power.