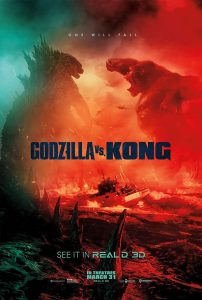 GODZILLA VS. KONG is the story of the gigantic clash of two titans. It is a usual day at the Pensacola, Florida complex of Apex Cybernetics. Suddenly, Godzilla attacks the company facility without any provocation and causes massive destruction. Till now, Godzilla was seen as the saviour of the humanity but this episode makes him the villain of the world. Meanwhile, in Skull Island, Kong has been kept in a very wide enclosure by Monarch. Dr Ilene Andrews (Rebecca Hall) works in the facility as an anthropological linguist. She has been trying her best to communicate with Kong and to understand his behavioural patterns. She is surprised when she finds out one day that her adopted mute daughter, Jia (Kaylee Hottle) manages to forge a bond with Kong and communicate with him. Dr. Nathan Lind (Alexander Skarsgård) is hired by Apex’s chiefs, Ren Serizawa (Shun Oguri) and Walter Simmons (Demián Bichir), based on his research and a book on the titans.

Ren and Walter plan to lure Godzilla into the Hollow Earth through an opening in Antarctica and then destroy him there. Godzilla and Kong have a very old rivalry and they feel that if they manage to get Kong at Hollow Earth, Godzilla would follow and their purpose could be achieved. In no time, Monarch gives the go-ahead to take Kong to Antarctica for the mission. Kong is chained and taken into a vast ship. Dr Ilene, Jia, Dr Nathan and a top Apex executive, Maia Simmons (Eiza González), also accompany Kong in the ship. Dr Ilene orders to take a detour so that they don’t pass through Godzilla’s usual route while in sea. Yet, Godzilla senses Kong’s presence and it attacks the ape. Kong manages to save himself but gets grievously injured. With the help of Jia, he manages to recover.

Meanwhile, in Florida, Bernie Hayes (Brian Tyree Henry), an Apex employee is running a podcast wherein he’s telling his listeners that all is not well in the company. He finds a fan in Madison (Millie Bobby Brown), the daughter of Monarch scientists Mark (Kyle Chandler) and the late Emma Russell. She manages to track Bernie down. Bernie shares with her that a mysterious shipment is about to be sent to Apex complex in Hong Kong. To find out more about it, they infiltrate into the almost-destroyed Apex facility in Pensacola, Florida. Both are also joined by Madison’s nerdy friend, Josh Valentine (Julian Dennison). What happens next forms the rest of the film.