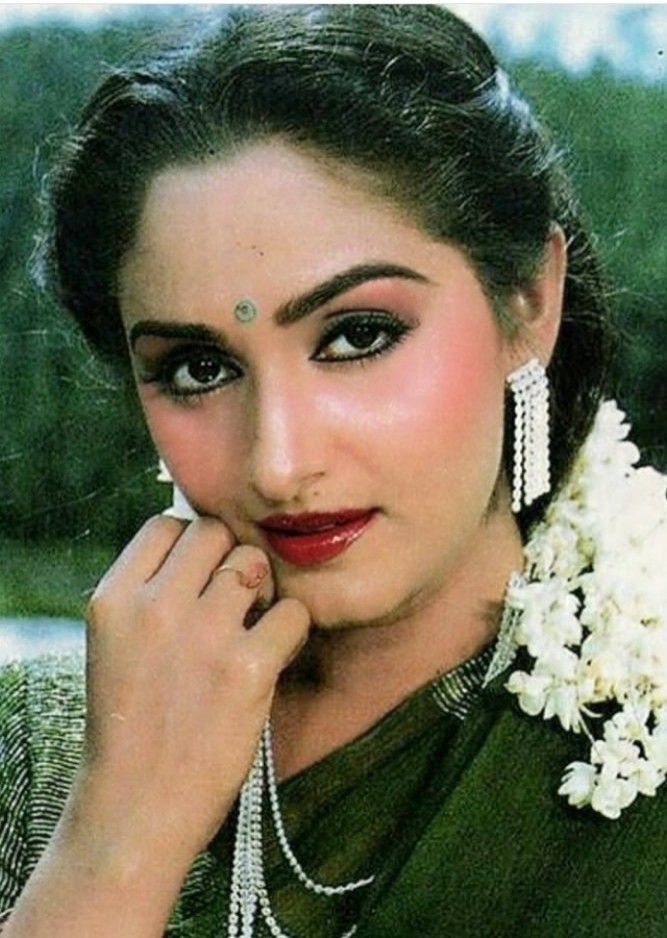 Jaya Prada made her debut to the Television with ETV’s Talk show Jayapradam, where she was the host of the show and interviewed many of the celebrated actors and technicians including Kamal Haasan, Chiranjeevi, K. Viswanath, ANR, Ram Gopal Varma and many others. The show made her closer to the Telugu audience again. In 2018, she acted in her first daily soap Perfect Pati telecasted in AndTV. She played an endearing mother in law Rajeshwari Rathore.

Following differences with party Supremo N. Chandrababu Naidu, she left the TDP to join Samajwadi Party. She contested from Rampur parliamentary Constituency in UP during the 2004 General election and got elected with a margin of more than 85000 votes. During her campaign for the Lok Sabha elections in 2009, she was issued a notice by the Election Commission for violating the code of conduct by distributing bindis to women in Rampur’s Swar locality. On 11 May 2009, Jaya Prada alleged that senior Samajwadi Party leader Azam Khan was distributing nude pictures of her. She was re-elected with a margin of more than 30,000 votes.

She joined the Bharatiya Janata Party in the presence of National General Secretary Bhupender Yadav on 26 March 2019.

Jaya Prada was born as Lalita Rani in Rajahmundry, Andhra Pradesh. Her father, Krishna Rao, was a Telugu film financier. Her mother, Neelaveni, was a home-maker. The young Lalitha attended a Telugu medium school in Rajahmundry and was also enrolled in dance and music classes at an early age.

In 2000, she acted in the Malayalam film Devadoothan, starring Mohanlal, directed by Sibi Malayil. The film garnered immensely popular reviews from the critics but failed at the box office. But it met with great appreciation from the audience when released in Home Media and when aired on television. his movie had evergreen hit songs. She also starred for the last time, opposite Kannada super star Dr. Raj Kumar in Shabdavedi. In 2002, she stepped into the Marathi film industry by being a guest in the movie Aadhaar. Thus far, she has acted in eight languages and has completed 300 films during a 30-year film career. In 2004, she acted in Ee Snehatheerathu, a Malayalam film as Kunchacko Boban’s mother.

Jaya Prada made a successful team not just with Amitabh Bachchan and Jeetendra, but also with her immediate screen rival Sridevi, with whom she has acted in about a dozen films. Their hit Telugu film Devatha (1982), where they played sisters who made huge sacrifices for each other, was remade into the hit Hindi film Tohfa (1984). These films endeared Jaya Prada to the traditional conservative section of film goers and she amassed a huge female fan following as well. It was an image that would serve her well when she started a new career as a politician. In 1985, she acted in the Malayalam film Iniyum Katha Thudarum directed by Joshiy starring Mammootty, Baby Shalini and Ambika.

She also owns the Jaya Prada Theater in Chennai.

In 2011, she returned to Malayalam cinema with a strong role in Pranayam, alongside Mohanlal and Anupam Kher. She played “Grace” in this film, which won her critical acclaim and several awards. Her 2012 Kannada film Krantiveera Sangolli Rayanna (Sangolli Rayanna) that saw her donning the historical role of courageous Kittur Chennamma, completed 100 days at the box office.

In 1979, K. Balachander repeated her in the Tamil film Ninaithale Inikkum opposite Kamal Haasan and Rajinikanth in which she played a terminally-ill patient. She continued to act in more films in Telugu opposite actors such NTR, ANR, Krishna, Krishnam Raju and Sobhan Babu throughout the 70s and 80s. She acted in highest number of films with Krishna like Ooriki monagadu, Singhasan (1986 film) , Mundadugu, Bhale krishnudu , Sri Rajeshwari vilas coffee club , Prajarajyam. K. Viswanath remade Siri Siri Muvva (1976) in Hindi as Sargam, introducing Jayaprada to Bollywood in 1979. The film was successful and she became a star there as well. She earned her first Filmfare nomination as Best Actress but couldn’t capitalize on her success since she couldn’t speak Hindi.

Jaya Prada (born Lalitha Rani; 3 April 1962) is an Indian film actress and politician. She was one of the most iconic and influential actresses in both Telugu and Hindi film industries in late 70’s, 80’s and early 90’s. Jaya Prada is the recipient of three Filmfare Awards South and has starred in many Telugu and Hindi films along with several Tamil, Malayalam, Kannada, Bengali and Marathi films. She left the film industry at the peak of her career, as she joined the Telugu Desam Party (TDP) in 1994 and entered politics. She was a Member of Parliament (MP) from Rampur from 2004 to 2014.

On 22 February 1989, she married producer Srikanth Nahata, who was already married to Chandra and had 3 children. This marriage stirred a lot of controversy, especially since Nahata did not divorce his wife and had children with his first wife after marrying Jaya Prada. Jaya Prada and Srikanth have no children together. Jaya Prada went on to adopt her sister’s son and raise him as her own.

In 1981, she starred in the critically acclaimed Tamil film 47 Natkal and simultaneously made Telugu film “47 Rojulu” by filmmaker K. Balachander in which Chiranjeevi played her villainous, bigamist husband. Saagara Sangamam directed by K. Vishwanath, starring Kamal Hassan proved to be a milestone in her career, winning her many accolades including Filmfare Award for Best Actress – Telugu in 1983. The same year, after she took Hindi lessons, director K. Vishwanath relaunched her in Hindi films, with Kaamchor where she spoke Hindi fluently for the first time. She was now able to consistently work in Hindi films, and earned two more Filmfare nominations as Best Actress for playing Amitabh Bachchan’s endearing girlfriend in Prakash Mehra’s Sharaabi (1984) and for her challenging double role in K. Vishwanath’s Sanjog.

When Jaya Prada was a teenager, she performed a dance at her school’s annual function. A film director in the audience offered her a three-minute dance number in the Telugu film Bhoomi Kosam. She was hesitant, but her family encouraged her to accept it. She was paid only 10 rupees for her work in the film, but the rushes of those three minutes of film were shown to the major figures of the Telugu film industry. Major filmmakers offered her starring roles in quality films, and she accepted them. She became a huge star in 1976 with major hit films. Director K. Balachander’s black-and-white film Anthuleni Katha (1976) showcased her dramatic skills; K. Viswanath’s color film Siri Siri Muvva (1976) showed her playing a mute girl with excellent dancing skills; and her title role as Sita in the big-budget mythological film Seetha Kalyanam confirmed her versatility. In 1977, she starred in Adavi Ramudu, which broke box office records and which permanently cemented her star status. The song “Aaresukoboyi Paresukunnanu” performed by Prada and co-star N.T. Rama Rao became a mass hit. Important filmmakers were casting her and repeating her in their films. Filmmaker Vijay introduced her to Kannada cinema in his 1977 super-hit movie Sanaadi Appanna alongside Kannada matinee idol Raj Kumar. The movie is also known to be the only movie to feature shehnai rendition by Ustad Bismillah Khan. Jaya Prada repeated her successful pairing with Rajkumar in films such as Huliya Haalina Mevu (1979), Kaviratna Kalidasa (1983) and Shabdavedhi (2000).

Jaya Prada continued to act as a heroine mainly opposite Amitabh and Jeetendra during the early 1990s. She also acted in some significant Kannada films as the heroine. From 1994 onwards, she cut back on film assignments and got more involved with a political career.

Indian director Satyajit Ray described her as one of the prettiest women in the world. Although she has acted in Bengali films, she has never worked for Ray. (She claimed that Ray had her in mind for a film, but his illness and subsequent death prevented their collaboration).

After she came out in open support of the former General Secretary of the Samajwadi Party, Amar Singh, Prada was expelled from the party on 2 February 2010 for allegedly indulging in anti-party activities and damaging the party’s secular image. Amar Singh, along with Jaya Prada floated his own political party, Rashtriya Lok Manch, in 2011, and fielded candidates in 360 of the 403 seats in Uttar Pradesh in the 2012 assembly polls. However, his party did not win a single seat in these elections. Later she, along with Amar Singh joined the RLD on 10 March 2014 and after that she got the ticket to contest from the Bijnor seat in the 2014 general elections. She, however, lost the election.

Jaya Prada joined the Telugu Desam Party (TDP) in 1994 at the invitation of its founder N. T. Rama Rao, on the eve of the assembly elections, and rose quickly through the ranks. At that time there was speculation that she would run for election, but she preferred not to make her electoral debut, although she was offered a seat by Rao.