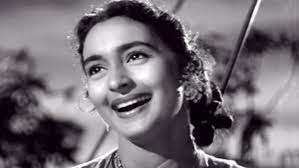 Nutan was married to naval Lieutenant-Commander Rajnish Bahl from 1959 until her death from breast cancer in 1991. They had a son, Mohnish Bahl, who is a film and television actor.

In the remaining 1980s, she played roles in blockbuster films such as Meri Jung (1985), Naam (1986) and Karma (1986). Karma was notable for being the first time she was paired with actor Dilip Kumar. For Mere Jung she won a Filmfare Award for Best Supporting Actress. Her last film released while she was alive was Kanoon Apna Apna in 1989. She died in 1991 of cancer. Two of her films Naseebwala (1992) and Insaniyat (1994) were released after her death. She also gave a stellar performance as Kaliganj ki Bahu in the TV serial Mujrim Hazir, her only role on the small screen.

In 1963, Nutan starred in Bimal Roy’s socio-realist Bandini as Kalyani, a young prisoner who was convicted after poisoning the wife of her lover (Ashok Kumar). The story follows her life in prison and how later she has to make a choice between her past love and a young prison doctor (Dharmendra) who fell in love with her. Nutan had to be persuaded to act in the film as she had quit acting after marriage. Bandini was a major critical success, which was attributed by critics mostly to Nutan’s portrayal, which is regarded as one of the finest performances in the history of Indian cinema. The film won the Filmfare Award for Best Movie and she received her third Best Actress Award. The Bengal Film Journalists’ Association, while ranking the film as the third-best Indian film of the year, acknowledged her with the Best Actress (Hindi section) award. Author and critic Dinesh Raheja wrote: “Sans screaming hysteria-niks, Nutan puts across one of the finest performances seen on Hindi screen. She recognised and was perfectly in tandem with Kalyani’s innate strength of character.” Film and theatre critic Gautaman Bhaskaran wrote for The Hindu: “Nutan as Kalyani gave perhaps her career’s best performance. Splendidly expressive, her understated role is something that cannot be easily matched by today’s painted heroines. Fear and anger show up so lividly in Nutan’s eyes that they haunt you long after you have walked out of the theatre.” In 2010, Filmfare included her performance in its “80 Iconic Performances” list. Anupama Chopra included the film in her list of “The 20 Best Hindi Films Ever Made”, calling her role “one of Hindi cinema’s most complex and fully realized female characters,” and further noting: “This was the role of a lifetime and Nutan, who … gave it all. Her face raged with a grand passion and a quiet grace.” In 2013, conducting a list of “25 Greatest Acting Performances of Indian Cinema” in celebration of a hundred years of Indian cinema, Forbes India included Nutan’s performance, hailing her work as “the best acting by a lead actress in Indian cinema”.

Nutan started her career as an actress as a fourteen-year-old in Hamari Beti (1950). This film was produced by her mother, Shobhna.

Her fourth Filmfare Award came for Milan (1967). She starred opposite Amitabh Bachchan in 1973’s Saudagar (1973), for which she received a sixth Filmfare nomination and a third BFJA award. In 1978, she made an astonishing return to the screen as the righteous Sanjukta Chauhan in Main Tulsi Tere Aangan Ki (1978). For this performance, she received an eighth Filmfare career nomination and won her fifth Filmfare best actress award, at the age of 42. She thus became a record holder in the category, having won five awards for Best Actress at Filmfare. At age 42, she is also the oldest winner of the award. Nutan was perhaps the only actress of her generation to command leading roles in her 40s, with tremendous success. Following this, she starred in Saajan ki Saheli (1981), as an ignorant, jealous wife to a husband who knowingly befriends the daughter she abandoned at childbirth.

Nutan was born in a Marathi Hindu Chandraseniya Kayastha Prabhu family on 4 June 1936 as the eldest of four children to director-poet Kumarsen Samarth and his actress wife Shobhna. She grew up with complexes as some considered her “skinny” and “ugly” in her childhood. She had two sisters: actress Tanuja and Chatura and a brother Jaideep. Her parents separated before Jaideep’s birth. Nutan was educated in St. Joseph’s Convent School, Panchgani before heading to Switzerland for further studies in 1953. She was sent there at the behest of her mother after her films failed to perform well. She described the one year spent there as the “happiest in my life”.

Nutan married Lieutenant-Commander Rajnish Bahl of the Indian Navy on 11 October 1959. Their only son Mohnish, was born in 1961. He went on to become a television and film actor. His daughter (Nutan’s granddaughter) Pranutan Bahl is also a Bollywood actress. Nutan was fond of hunting. Nutan was diagnosed and treated for breast cancer in 1990. In February 1991, she was admitted to Breach Candy Hospital in Mumbai after she fell ill. At the time, she was filming Garajna and Insaniyat. She died at 12:07 p.m. (IST) on 21 February. Her husband died from a fire accident in his apartment in 2004.

The daughter of filmmaker Kumarsen Samarth and film actress Shobhna Samarth, Nutan started her career at the age of 14 in the 1950 film Hamari Beti, directed by her mother. She subsequently starred in such films as Nagina and Humlog (both 1951).
Her role in Seema (1955) garnered her wider recognition and a Filmfare Award for Best Actress. She continued playing leading roles through the 1960s until the late 1970s and went on to win the award on four other occasions for her roles in Sujata (1959), Bandini (1963), Milan (1967) and Main Tulsi Tere Aangan Ki (1978). Some of her other films of this period include Anari (1959), Chhalia (1960), Tere Ghar Ke Saamne (1963), Saraswatichandra (1968), Anuraag (1972) and Saudagar (1973). In the 1980s, Nutan started playing character roles and continued working until shortly before her death. She portrayed mostly motherly roles in such films as Saajan Ki Saheli (1981), Meri Jung (1985) and Naam (1986). Her performance in Meri Jung earned her a sixth and last Filmfare Award, this time in the Best Supporting Actress category.

Her first big break was Seema, for which she won her first Filmfare Best Actress Award. She followed her success with a romantic comedy, Paying Guest, in which she co-starred with Dev Anand. In 1959 she starred in two hit films, Anari (with Raj Kapoor) and Bimal Roy’s Sujata (with Sunil Dutt). In the 1960s and 1970s she had many more successful films including Chhalia (1960), Saraswatichandra (1968), Devi (1970) and Main Tulsi Tere Aangan Ki (1978).

According to Encyclopædia Britannica, Nutan had “developed a natural acting style under Bimal Roy’s direction.” Actresses such as Sadhana and Smita Patil noted Nutan as their influence. Sadhana was once quoted as saying: “If there was any actress I modelled myself in the lines of it was the versatile Nutan in Seema, Sujata and Bandini. Parakh was a film where I really followed Nutan.” Filmmaker Sanjay Leela Bhansali said of her: “They don’t make actresses like her anymore.”
In 2011, Rediff.com listed her as the third-greatest actress of all-time.
In 2013, while including her performance in Bandini in their list of “25 Greatest Acting Performances of Indian Cinema”, Forbes India observed, “Nutan’s genius lay in portraying a whole range of emotions without resorting to over-the-top histrionics.”
Nutan’s narrative is depicted in the book Nutan – Asen Mi Nasen Mi (meaning ‘whether I will exist or not’) written by famous Marathi author Lalita Tamhane. The book can be summarized as describing Nutan’s life experiences, interactions with co-actors/family/friends, etc., as told by her to Lalita Tamhane.
A postage stamp, bearing her photo, was released to honour her by India’s Minister of State for Communication and Information Technology in February 2011.
Google commemorated Nutan with a Doodle on her 81st birthday.

Nutan was noted for her willingness to play unconventional roles and several of her roles were labelled “path-breaking”. M.L. Dhawan from The Tribune wrote: “When squeakers and screamers ruled the roost, Nutan fine-tuned her dialogue delivery with an evocative voice. A natural throw was the hallmark of Nutan’s dialogue delivery. She was low key and mellow as she was peppery and sarcastic and yet made a strong impact.” According to Dhawan: “a fleeting expression on her face conveyed much more than dialogue,” and he further noted her for accepting only roles in which “she either played the main part or at least shared equal footing with the male counterpart.”

In 1960, she starred opposite Raj Kapoor once again in Manmohan Desai’s Chhalia. She received another Filmfare nomination for the role. In a film review at the time, Filmfare wrote: “As the unfortunate girl disowned by her relatives for no fault of hers, Nutan puts over a superb and memorable portrayal.”

Nutan Samarth Bahl (4 June 1936 – 21 February 1991), known mononymously as Nutan, was an Indian film actress. In a career spanning nearly four decades, she appeared in more than 70 Hindi films, many in starring roles. Regarded as one of the finest actors in the history of Indian cinema, Nutan was noted for playing unconventional parts and her performances often received praise and accolades. Nutan holds the record of five wins of the Best Actress award at Filmfare, which was held only by her for over 30 years until it was matched by her niece Kajol in 2011. In 1974, she was awarded the Padma Shri by the Government of India.