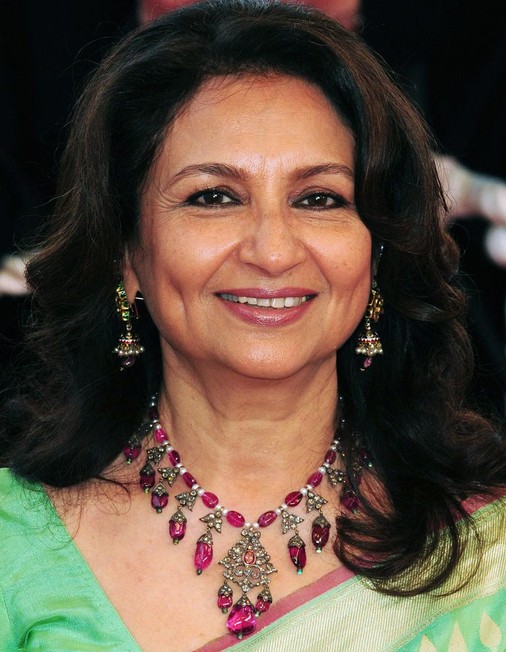 Samanta later teamed up Tagore with Rajesh Khanna for movies such as Aradhana (1969) and Amar Prem (1972). Other directors paired them together in Safar (1970), Daag (1973) and Maalik (1972). The Khanna-Tagore pair yielded 7 box office hits – Aradhana, Safar, Amar Prem, Chhoti Bahu, Daag, Raja Rani and Avishkaar. As per the review of the film Raja Rani made in 2014 by the Hindu newspaper, the film did well at the box office and taking into consideration, the inflation, as of 2014, the film would have grossed more than 1 billion.
She starred in Gulzar’s 1975 film, Mausam and won the National Film Award for Best Actress. She also played a supporting role in Mira Nair’s 1991 film, Mississippi Masala. She was the highest paid Bollywood actress from 1970 to 1976 along with Sadhana & Mumtaz. She had a very successful pairing opposite Dharmendra, along with whom she starred in seven movies – Devar (1966), Anupama (1966), Mere Hamdam Mere Dost (1968), Satyakam (1969), Yakeen (1969), Chupke Chupke (1975), Ek Mahal Ho Sapno Ka (1975) and Sunny (1984). Her filmography also include Faraar (1975) and Besharam (1978) opposite Amitabh Bachchan; Mausam (1975) opposite Sanjeev Kumar; and Bengali film Mangaldeep (1991) opposite Naseeruddin Shah.

Sharmila Tagore, also known as Begum Ayesha Sultana Khan, (born 8 December 1944) is a retired Indian actress. Primarily known for her work in Hindi and Bengali cinema, Tagore is the recipient of two National Film Awards, a Filmfare Award, and the Filmfare Lifetime Achievement Award for her contributions to Hindi cinema. In 2013, the Government of India, honoured her with Padma Bhushan, India’s third highest civilian honour for her contributions to the Indian culture through performing arts.

Sharmila Tagore was born in Kanpur, India, to Gitindranath Tagore, a general manager in the British India Corporation, and his wife Ira Tagore (née Barua). While Tagore’s father belonged to a Bengali Hindu family, her mother came from an Assamese Hindu family, and both of them were distantly related to the Nobel laureate Rabindranath Tagore. Gitindranath was the grandson of the noted painter Gaganendranath Tagore, whose own father Gunendranath had been a first cousin of the laureate. In fact, Tagore is more closely related to Rabindranath Tagore through her mother: her maternal grandmother, Latika Barua (née Tagore), was the granddaughter of Rabindranath Tagore’s brother, Dwijendranath Tagore. Tagore’s maternal grandfather (husband of Latika Barua née Tagore) was Jnanadabhiram Barua, the first Principal of Earl Law College in Guwahati (now known as Government Law College), himself the son of the noted social worker Gunabhiram Barua. As a member of the Tagore family, she is also a distant relative of the actress Devika Rani and the painter Abanindranath Tagore (brother of Gaganendranath Tagore).

Tagore married Mansoor Ali Khan Pataudi, the Nawab of Pataudi and former captain of the Indian cricket team, on 27 December 1968. She converted to Islam before marrying him, and became begum Ayesha Begum/Ayesh Sultana . They had three children: Saif Ali Khan (b. 1970), a Bollywood actor, Saba Ali Khan (b. 1976), a jewellery designer, and Soha Ali Khan (b. 1978), a Bollywood actress and TV personality. Mansoor Ali Khan Pataudi died at age 70, on 22 September 2011. In November 2012, she wrote to the Board of Control for Cricket in India (BCCI) asking for the upcoming series between India and England to be recognised as the Pataudi Trophy, which was commissioned by the MCC in 2007. The Indian board responded saying that England’s Test series in India are contested for the Anthony de Mello Trophy, in honour of the cricket administrator and co-founder of the BCCI.

Tagore began her career as an actress in Satyajit Ray’s 1959 Bengali film, Apur Sansar (The World of Apu), as the ill-fated bride of the title character. In 1959, Ray cast her in Devi, a film set in 1860 on Hindu orthodoxy and rational reforms. She considers it as her favourite film and performance.

She later appeared in Shakti Samanta’s Kashmir Ki Kali in 1964. Samanta cast her in many more films, including An Evening in Paris (1967), in which she became the first Indian actress to appear in a bikini, which established Tagore as somewhat of a sex symbol in Hindi films. She also posed in a bikini for the glossy Filmfare magazine in 1966. But, when she was the chairperson of the Central Board of Film Certification 36 years later, she expressed concerns about the increased use of bikinis in Indian films.

Apart from acting, Tagore has also served as the chairperson of the Central Board of Film Certification from October 2004 to March 2011. In December 2005, she was chosen as a UNICEF Goodwill Ambassador. She was married to cricketer Mansoor Ali Khan Pataudi with whom she had three children; actors Saif, Soha, and designer Saba.

Tagore was the eldest of three children and had two younger sisters, the late Oindrila Kunda [Tinku Tagore] and Romila Sen . Oindrila was the first in the family to act in a film, and the only role she ever played was that of Mini, the child character (but a central character) in Tapan Sinha’s film Kabuliwala (1957). In adulthood, she became an international bridge player. Her other sister, Romila Sen, married to Nikhil Sen, a businessman who served as Chief Operating Officer of Britannia Industries for several years, passed away as the founder and managing director of Unibic Foods in November 2019.

Tagore attended St. John’s Diocesan Girls’ Higher Secondary School and Loreto Convent, Asansol. She made her film debut when she was a 13-year-old schoolgirl, after which her studies lost priority. Within a short while, her attendance and performance at school suffered, she came to be regarded as a bad influence on her classmates, and was faced with a choice of either doing films or studying further. At that point, her father advised her to move ahead in life, commit herself to a film career and ‘give it her all’ in order to become successful. She did as her father advised, and credits her parents for having supported her at every point in her life.