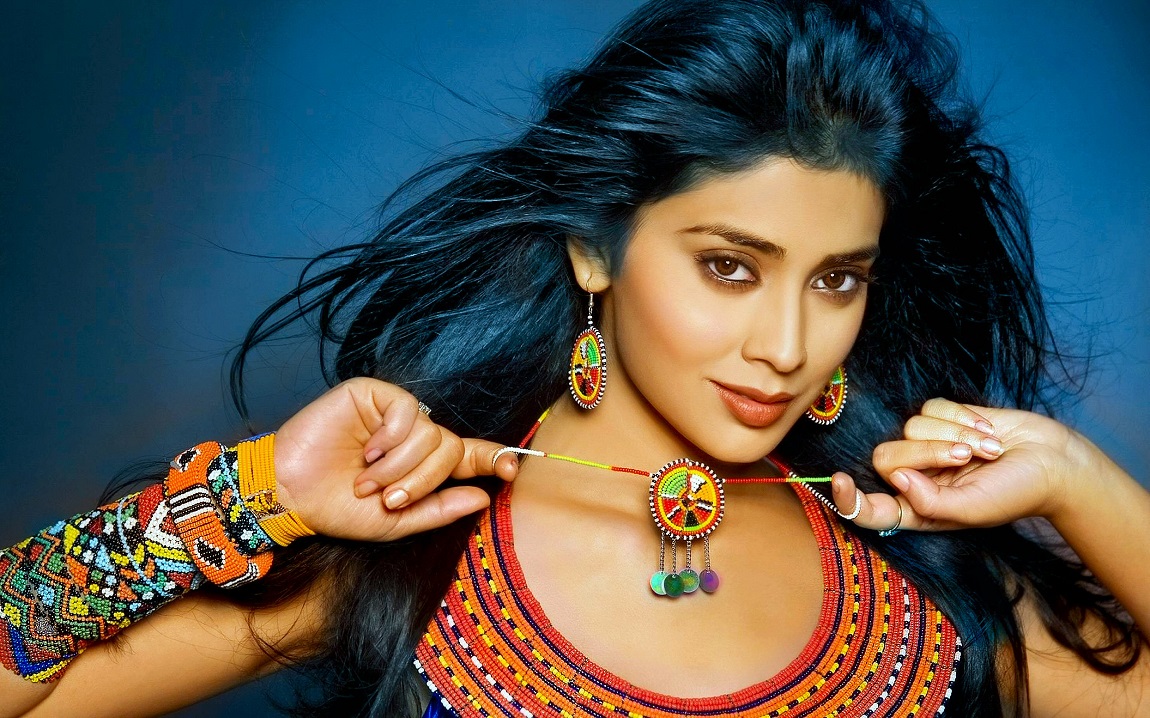 Shriya Saran is an Indian film actor. She began her career, acting in music videos, while also attending an acting studio to follow her dream to act. After her debut in 2001 with Ishtam, she gained Telugu cinema’s attention in 2002 by playing the role of Bhanu in Santhosham, her first major hit.

Following the film she appeared in several Telugu films with prominent actors, whilst, also making in-roads in Bollywood as well as the Tamil film industry. In 2007, Saran became a national figure after her performance alongside Rajinikanth in Sivaji: The Boss, after which she signed several Bollywood, Kollywood, and also a Hollywood films.

Saran performs predominantly in leading heroine roles in high-budget and major studio films, ranging from romantic comedies and drama to science fiction and action thrillers. Her most popular released films include Santhosham (2002), Tagore (2003), Sivaji: The Boss (2007), and Azhagiya Tamil Magan (2007).

Shriya’s first opportunity to appear in front of the camera came whilst she was studying in her second year at the LSR College in Delhi, which she quit to participate for the shoot. Saran’s first screen appearance was in the music video of Tirakthi Kyon Hawa by Reenu Nathan, in which she was given a chance to perform by her dance teacher who had recommended her.

The video shot at Banaras gave her fame, prompting Ramoji Films to offer her the lead role of Neha in their film Ishtam starring and directed by newcomers. Saran despite wanting to only try one film eventually catapulted to fame. Before the release of Ishtam, Saran signed three mega-budget films; Santhosham, Nuvve Nuvve and Tagore with the industry’s top heroes, Nagarjuna, Tarun and Chiranjeevi, respectively.

Saran was born in Haridwar and spent most of her life in a small colony at the foothills of the Shivalik range. Her father, Pushpendra Saran works for the state-owned Bharat Heavy Electricals Limited while her mother, Neeraja Saran was a chemistry teacher at the Delhi Public School, which Saran had attended.

Her elder brother, Abhiroop Saran is four years older than her and currently works with an advertising firm, FCB Ulka, in Mumbai. He is married to Aarti, who Saran describes her relationship with her “like a house on fire”.

As a kid, Saran claims to have “pooled her pocket money that she was given over a period of time and given it to a blind school”. When Shriya was 17, her family moved to Delhi because she was passionate to learn kathak from eminent guru, Shovana Narayan.

In January 2008, a Hindu organization based in Chennai lodged a police complaint against Saran, objecting to the outfit worn by her during the 175th day celebration of her film, Sivaji. In a complaint, the Hindu Makkal Katchi (HMK) alleged that Shriya’s outfit had ‘offended Hindu culture’.

The complaint was officially taken in by the police and is currently under investigation. Shriya is the fourth actor, after Khushboo, Shilpa Shetty and Reema Sen to face the fire of political parties and organizations in recent times. Shriya then tendered an unconditional apology for “wearing inappropriate skimpy attire”