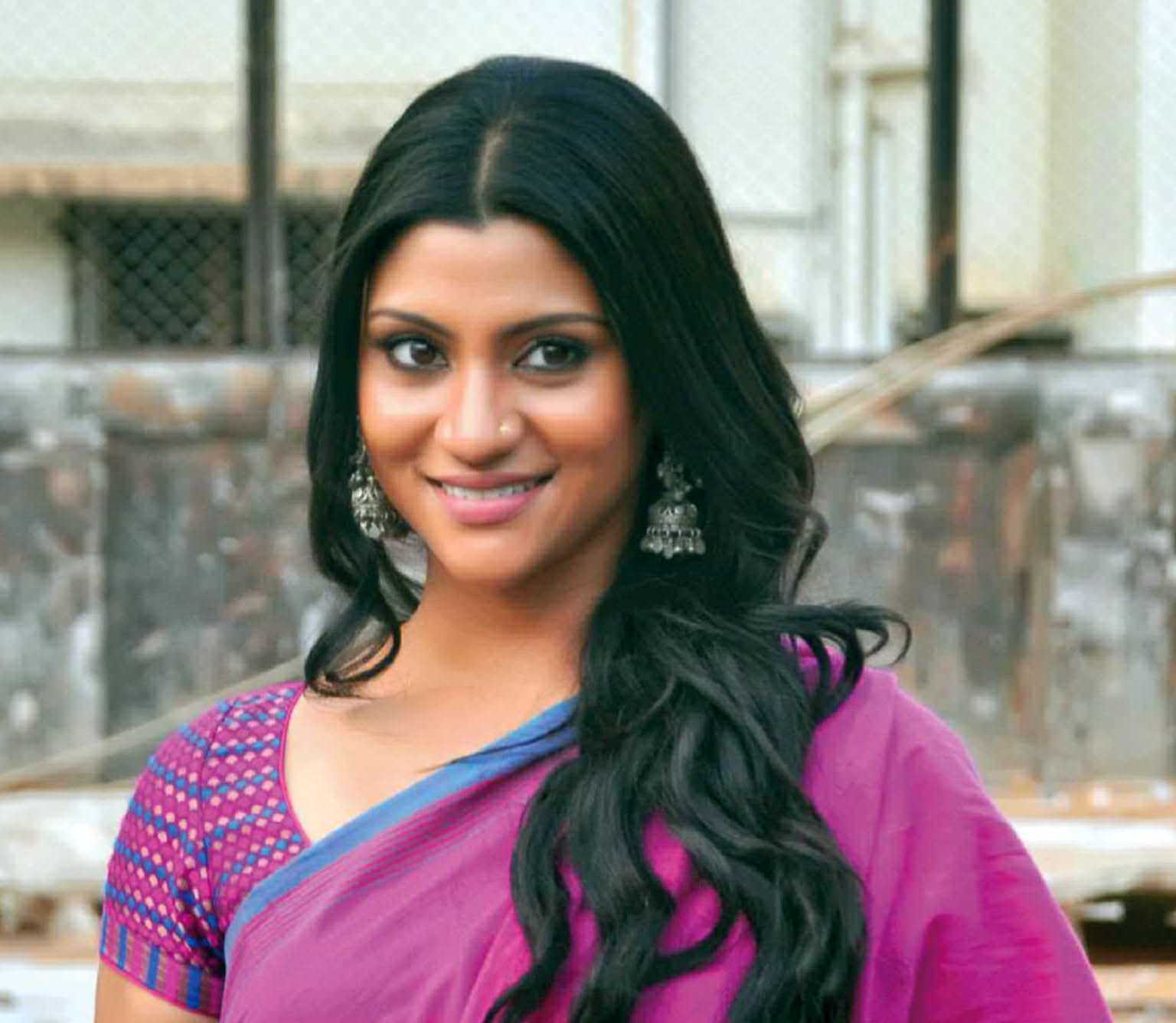 In late 2007, Sen Sharma acted in two movies under the Yash Raj Films banner. She noted her excitement toward these two projects as these were the first films in which she had to lip-sync for songs. In the first one, Laaga Chunari Mein Daag, a drama directed by Pradeep Sarkar, she portrayed the character of a Banaras small town young woman, Chutki, alongside Rani Mukerji. The film was a critical and commercial failure in India, even though her performance was received well. The second one was Aaja Nachle, which was widely promoted as the comeback film of Madhuri Dixit. The film did not do well. Rajeev Masand from CNN-IBN noted her performance in the film as being “…nothing short of fantastic. Her greatest strength is that she isn’t afraid of making a fool of herself and she doesn’t worry about being laughed at. As a result, her performance in Aaja Nachle is fearless and uninhibited.”

In 2016, Sharma is working on A.R. Murgadoss’ film entitled Akira, where she was portrayed a cop alongside Sonakshi Sinha.

Sen Sharma next starred in Zoya Akhtar’s Luck by Chance, opposite Farhan Akhtar. Upon release, the film met with highly positive reviews from critics, as did her performance, but its financial income was modest. Sen Sharma’s latest 2009 release was Ayan Mukerjee’s romantic comedy Wake Up Sid in which she starred alongside Ranbir Kapoor. Upon release, the film received universally positive reviews, and her performance received rave reviews. Taran Adarsh of Bollywood Hungama wrote, “Konkona is natural to the core and the best part is, she’s so effortless. Here’s another winning performance from this incredible performer.” The New York Times wrote, “Ms. Sharma has made a specialty of characters like Aisha: independent urban women, whose dreams involve careers as well as love. Her Aisha is a nuanced creation — ambitious, sympathetic, believable — and Mr. Mukerji, making his directing debut, is right to let her run away with the film.”

In 2001, she starred in the English-language film Mr. and Mrs. Iyer, directed by Aparna Sen. The film performed well mainly in multiplexes and was a major critical success. Sen Sharma’s performance as a Tamil housewife and her mastery of the accent were received well and she was awarded the National Film Award for Best Actress. Her performance was later included in the 2010 issue of the “Top 80 Iconic Performances” by Filmfare.

Sen Sharma has a degree in English from St Stephen’s College, Delhi, which she received in 2001. She was a student of the Modern High School for Girls.

Her first release of 2007 was her second collaboration with Madhur Bhandarkar, a noir film named Traffic Signal, in which she played a street prostitute. Later that year, she appeared in Anurag Basu’s Life in a… Metro. The film opened to positive reviews and performed well at the Indian box office. Metro depicted the lives of different individuals in Mumbai, and Sen Sharma’s performance as a young and insecure woman earned her a second Filmfare Award.

Sen Sharma made her debut as a child artist in the Bengali film Indira (1983). In 2000, she made her adult debut in the Bengali film Ek Je Aachhe Kanya, in which she played a negative character. It was followed by a role in Rituparno Ghosh’s acclaimed film Titli, opposite Mithun Chakraborty and her mother Aparna Sen.

In 2008, Sen Sharma starred in Dil Kabaddi. She starred in a short film (How Can It Be?) directed by Mira Nair for a movie project called 8, which was screened at several film festivals in 2008 before having a theatrical release.

In June 2009, Sen Sharma starred onstage first time at Atul Kumar’s The Blue Mug alongside Rajat Kapoor, Vinay Pathak, Ranvir Shorey and Sheeba Chadha. In 2010, the play was toured around the nation and abroad.

This was followed by the National Film Award-winning social film, Page 3 (2005). Her role of a smart journalist drew praise and she became a more familiar face to the movie-going public.

In 2013, Sen Sharma starred in Balaji Telefilms’ Ek Thi Daayan, directed by newcomer Kannan Iyer and produced by Vishal Bhardwaj and Ekta Kapoor. The movie also stars Emraan Hashmi, Kalki Koechlin and Huma Qureshi, and the film itself is inspired by the short story written by her father Mukul Sharma. She has also played a lead role in Aparna Sen’s Goynar Baksho.

Sen Sharma started dating actor and co-star Ranvir Shorey in 2007. The couple got married on 3 September 2010 in a private ceremony. The Times of India reported that Sen Sharma gave birth to her first child, Haroon, on 15 March 2011 at a South Mumbai hospital. Sen Sharma and Shorey announced their separation in September 2015. They still remain friends and share the custody of their son. The couple finally got divorced on 13 August 2020.

In 2015, Sharma starred in the Bengali film Kadombori as Tagore’s sister-in-law and also played Lakshmi Das, the wife of Gour Hari Das – an Odisha freedom fighter who spent 32 years attempting to convince the government of his patriotism. In October, she played a character based on Nupur Talwar in Vishal Bhardwaj’s film Talvar, regarding the 2008 Noida Double Murder case. The film premiered at the Toronto Film Festival to extensive critical acclaim for Sharma and her co-stars Irrfan Khan and Neeraj Kabi, and also became a sleeper hit in India.
In the same year she played Nayantara in a short film, Nayantara’s Necklace.

Konkona Sen Sharma (born 3 December 1979) is an Indian actress, writer, and director who works primarily in Hindi and Bengali films. She has received two National Film Awards and four Filmfare Awards. The daughter of filmmaker–actress Aparna Sen, Sen Sharma appears primarily in arthouse independent films, and her achievements in the genre have established her as one of the leading actresses of contemporary parallel cinema. She has also acted in mainstream films like Laaga Chunari Mein Daag for which too she has received awards.

In 2021, Sen Sharma will star in the Amazon Prime web series Mumbai Diaries 26/11. Directed by Nikkhil Advani and produced by Emmay Entertainment, it will also feature Mohit Raina, Tina Desai, and Shreya Dhanwanthary in the lead roles.

In 2017 her directorial debut A Death in the Gunj released (2 June 2017), which starred Vikrant Massey and Kalki Koechlin in pivotal roles. The film was critically acclaimed and won her the best director award in the New York Indian film festival and also in the MAMI film festival.
In July, her long-awaited Lipstick Under My Burkha released, directed by Alankrita Srivastava. The film garnered positive reviews and did well at the box office too.
Her next project, titled Scholarship, alongside Kalki Koechlin is in pre-production.

In 2009, she appeared in the low-budget English-language film The President Is Coming, directed by Kunaal Roy Kapur, to generally positive reviews. Nikhat Kazmi from The Times of India wrote, “Performance-wise, it’s the uptight and complex-ridden Ms Konkona who walks away with laurels and laughs even as the film takes a healthy snigger at the desi self.”

Following this, Sen Sharma acted in Dosar, a Bengali art film by Rituporno Ghosh which was premiered at several international film festivals. She won the Best Actress award at Mahindra Indo-American Arts Council (MIAAC) Film Festival for her performance.

Making her debut as a child artist in the film Indira (1983), Sharma debuted as an adult in the Bengali thriller Ek Je Aachhe Kanya (2000). She first gained attention with the English-language film Mr. and Mrs. Iyer (2002), which was directed by her mother, and received the National Film Award for Best Actress for her performance. Her appearance in the drama Page 3 (2005) got her wider recognition, and she has since starred in a number of films, most of which have won her praise rather than commercial success. She won two consecutive Filmfare Best Supporting Actress Awards for her performances in Omkara (2006) and Life in a… Metro (2007), respectively. Her performance in the former won her a second National Award under the Best Supporting Actress category. She was the first recipient of the Best Actress award at the Filmfare Awards East for her work in the Bengali film Goynar Baksho (2014).
In 2017, her directorial debut film A Death in the Gunj was released and she won the Filmfare Award for Best Debut Director. In the same year she starred in Lipstick Under My Burkha, which won her numerous international awards.

Sen Sharma was offered the lead role in Mira Nair’s Hollywood film, The Namesake (2007), but owing to clashing dates with other films, she could not commit to the project. However, she followed it with acclaimed performances as a mentally ill woman in 15 Park Avenue (2005) and as a middle age village woman in Omkara (2006). For the latter, she received both the Filmfare Best Supporting Actress Award and the National Film Award for Best Supporting Actress. Her next release Deadline: Sirf 24 Ghante (2006) got average reviews. In 2006, Sen Sharma made her directorial debut with an 18-minute Bengali short film titled Naamkoron (Naming Ceremony) for the Kala Ghoda Film Festival.

Sharma was born on 3 December 1979 Her father Mukul Sharma was a science writer and journalist and her mother Aparna Sen an actress and film director. She has an elder sister, Kamalini Chatterjee. Sen Sharma’s maternal grandfather, Chidananda Dasgupta, was a film critic, scholar, professor, writer and one of the co-founders of the Calcutta Film Society. Her grandmother Supriya Dasgupta was a cousin of legendary modern Bengali poet Jibanananda Das.