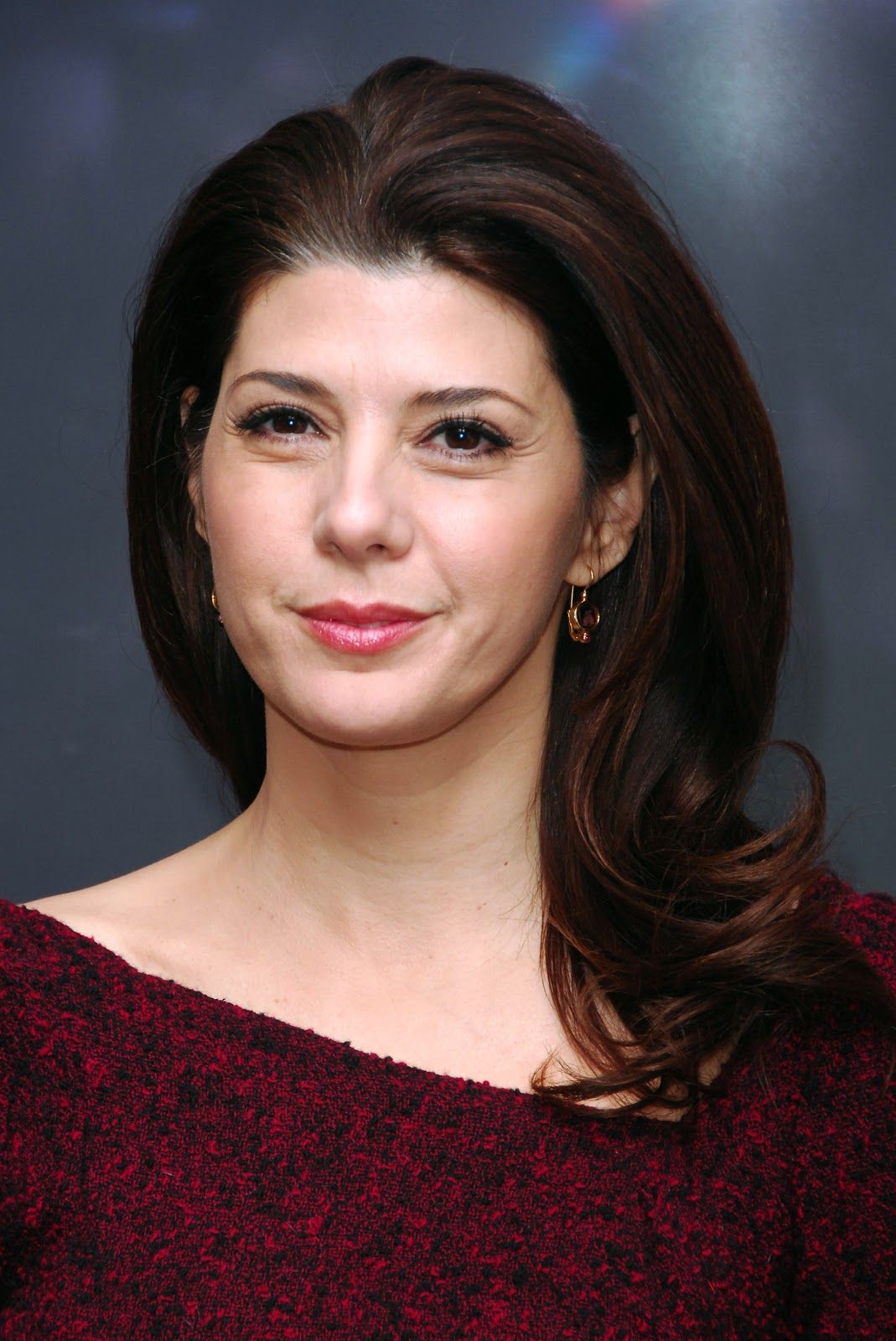 In 2003, Tomei appeared in one of her biggest commercial hits, Anger Management. The following year, she appeared in the film Alfie, based on the 1966 British film of the same name. In 2005, she was featured in an ad campaign for Hanes with the slogan “Look who we’ve got our Hanes on now”, featuring various other celebrities, including Michael Jordan, Jennifer Love Hewitt, and Matthew Perry. In 2006, Tomei had a recurring role in Rescue Me, playing Johnny Gavin’s ex-wife Angie. She won a Gracie Allen Award for Supporting Actress in a Drama Series for her work in the four episodes in which she appeared. The following year, she appeared in the comedy Wild Hogs. The film was the 13th-highest-grossing movie of 2007 ($168,273,550 domestic box office). She also starred in the Sidney Lumet-directed Before the Devil Knows You’re Dead. The film was released to critical acclaim.

Tomei was featured in the second episode of the third season of NBC’s Who Do You Think You Are?, on February 10, 2012. In the episode, she traveled to Tuscany and to the island of Elba to uncover the truth about the 100-year-old murder of her great-grandfather, Francesco Leopoldo Bianchi.

During the 1990s, Tomei made several television appearances. In 1996, she made a guest appearance on the sitcom Seinfeld, playing herself in the two-part episode “The Cadillac”. In the episode, George Costanza attempts to get a date with her through a friend of Elaine Benes’s. She also made an appearance on The Simpsons as movie star Sara Sloane, who falls in love with Ned Flanders. Former Saturday Night Live cast member Jay Mohr wrote in his book Gasping for Airtime that, as guest host in October 1994, Tomei insisted that a proposed sketch, “Good Morning Brooklyn”, not be used because she did not like the idea of being stereotyped; that displeased the writers and performers, given the show’s penchant for satirizing celebrities. Tomei did parody her My Cousin Vinny role, which had considerable Brooklyn influence, in a skit (out of several recurring) spoofing the 1995 O.J. Simpson murder trial.

After working on the television series As the World Turns, Tomei came to prominence as a cast member on The Cosby Show spin-off A Different World in 1987. After having minor roles in a few films, she came to international attention in 1992 with the comedy My Cousin Vinny, for which she received an Academy Award for Best Supporting Actress. She received two additional Academy Award nominations for In the Bedroom (2001) and The Wrestler (2008).

Tomei has also worked in theater. She was formerly involved with the Naked Angels Theater Company and appeared in plays, such as Daughters (1986), Wait Until Dark (1998), Top Girls (2008), for which she received a nomination for the Drama Desk Award for Outstanding Featured Actress in a Play, and The Realistic Joneses (2014), for which she received a special award at the Drama Desk Awards.

After her Oscar win, Tomei appeared as silent film star Mabel Normand in the film Chaplin, with her then-boyfriend Robert Downey Jr. playing Charlie Chaplin. The following year, she starred in the romantic drama Untamed Heart with Christian Slater, for which they won the MTV Movie Award for Best Kiss. Tomei had won the previous year for Best Breakthrough Performance for My Cousin Vinny. The next year, Tomei appeared alongside Downey again in the romantic comedy Only You. She then appeared in Nick Cassavetes’ Unhook the Stars. Of Tomei’s performance, Stephen Holden of The New York Times compared her favorably to the film’s star, Gena Rowlands, writing, “Ms. Tomei is equally fine as Mildred’s [Rowlands’ character] younger, hot-tempered neighbor, whose raw working-class feistiness and bluntly profane vocabulary initially repel the genteel older woman.” She received her first Screen Actors Guild award nomination for Outstanding Female Supporting Actor for her performance. In 1998, she was nominated for the American Comedy Award for Funniest Supporting Actress for Tamara Jenkins’ cult film Slums of Beverly Hills. The independent feature was well received by critics and the public, with Janet Maslin of The New York Times writing, “Jenkins makes the most of an especially ingratiating cast, with Ms. Tomei very charming and funny as Rita,” and Emanuel Levy of Variety describing Tomei as “spunky and sexy… more subdued than she usually is.” Tomei spent several years away from high-profile roles and major motion pictures in the late 1990s before rising again to prominence in the early 2000s.

In 2010, Tomei appeared in Cyrus, a comedy-drama co-starring John C. Reilly and Jonah Hill. Tomei hosted the 2011 Scientific and Technical Awards, which was followed by an appearance at the 83rd Academy Awards. She starred in the mystery-suspense film The Lincoln Lawyer. She also appeared in Salvation Boulevard, which premiered at the 2011 Sundance Film Festival. Tomei’s other 2011 films included Crazy, Stupid, Love and the George Clooney film The Ides of March. She is in talks to star in the indie comedy Married and Cheating. In an interview, Lady Gaga said she would want Tomei to portray her in a film about the singer. Tomei responded, “I was thrilled when I heard. I love her. I love her music. And she’s an awesome businesswoman. So I was so touched, really. I think it’s incredible that she likes my work and that she’d think of me.”

Tomei appeared in the 2000 film What Women Want, a commercial success, and had a supporting role in the romantic comedy Someone Like You. In 2001, she appeared in Todd Field’s Best Picture nominee In the Bedroom, earning several awards including a ShoWest Award for Best Supporting Actress in 2002. Variety wrote, “Tomei is winning in what is surely her most naturalistic and unaffected performance,” while The New York Times writer Stephen Holden exclaimed, “Ms. Tomei’s ruined, sorrowful Natalie is easily her finest screen role.” In the Bedroom earned Tomei a second Academy Award nomination and her first Golden Globe Award nomination for Best Supporting Actress. Tomei also shared a Screen Actors Guild Award nomination for Outstanding Performance by a Cast. In 2002, she appeared in the Bollywood-inspired film The Guru and voiced the role of Bree Blackburn, one of the two the main antagonists in the animated feature film The Wild Thornberrys Movie.

Tomei followed up As the World Turns in 1986 with a role on the sitcom A Different World as Maggie Lauten during the first season. Her film debut was a minor role in the 1984 comedy film The Flamingo Kid, in which she played Mandy, a waitress. She had only one line in the film. During this phase, she made her stage debut in 1987 at the age of 22 in the off-Broadway play Daughters, playing Cetta. The role earned her rave reviews and the Theatre World Award for outstanding debut on stage.

Between 2008 and 2012, Tomei was in a relationship with actor Logan Marshall-Green. They were rumored to be engaged, but a representative for Tomei denied this. Tomei said in 2009, “I’m not that big a fan of marriage as an institution, and I don’t know why women need to have children to be seen as complete human beings.”

Marisa Tomei was born on December 4, 1964, in Brooklyn, New York, to Adelaide “Addie” (née Bianchi), an English teacher, and Gary A. Tomei, a trial lawyer. She has a younger brother, actor Adam Tomei, and was partly raised by her paternal grandparents. Tomei’s parents are both of Italian descent; her father’s ancestors came from Tuscany, Calabria, and Campania, while her mother’s ancestors are from Tuscany and Sicily. She graduated from Edward R. Murrow High School in 1982.

Following several small films, Tomei came to international prominence with her comedic performance in the 1992 film My Cousin Vinny, for which she received critical praise. Critic Vincent Canby wrote, “Ms. Tomei gives every indication of being a fine comedian, whether towering over Mr. Pesci and trying to look small, or arguing about a leaky faucet in terms that demonstrate her knowledge of plumbing. Mona Lisa is also a first-rate auto mechanic, which comes in handy in the untying of the knotted story.” For her performance, Tomei was named Best Supporting Actress at the 1993 Academy Awards, prevailing over Miranda Richardson, Joan Plowright, Vanessa Redgrave and Judy Davis. American film critic Rex Reed created controversy (and a minor Hollywood myth) when he suggested that Jack Palance had announced the wrong name after opening the envelope. While this allegation was repeatedly disproved —even the Academy officially denied it —Tomei called the story “extremely hurtful”. A Price Waterhouse accountant explained that if such an event had occurred, “we have an agreement with the Academy that one of us would step on stage, introduce ourselves, and say the presenter misspoke.” This was borne out by the events at the 2017 Oscars, when La La Land was mistakenly announced as the Best Picture winner because of an error in handling the award cards and the real winner, Moonlight, was announced shortly thereafter.

Tomei portrayed a single mom back in school at Binghamton University taking a class taught by Hugh Grant in Marc Lawrence’s 2014 written and directed The Rewrite. In 2018, Tomei played Dr. May Updale in The First Purge. She portrays Aunt May in the Marvel Cinematic Universe, appearing in Captain America: Civil War (2016), Spider-Man: Homecoming (2017), Avengers: Endgame (2019), and Spider-Man: Far From Home (2019). She was also cast to play All in the Family’s Edith Bunker in ABC’s Live in Front of a Studio Audience specials.

In 2008, Tomei played Cassidy/Pam, a struggling stripper, in the Darren Aronofsky film The Wrestler. She appeared in several nude dance numbers in the film. Aronofsky said, “This role shows how courageous and brave Marisa is. And ultimately she’s really sexy. We knew nudity was a big part of the picture, and she wanted to be that exposed and vulnerable.” Numerous critics heralded this performance as a standout in her career. The Hollywood Reporter wrote, “Tomei delivers one of her most arresting performances, again without any trace of vanity.” Ty Burr of The Boston Globe wrote, “Tomei gives a brave and scrupulously honest performance, one that’s most naked when Pam has her clothes on.” Variety exclaimed, “Tomei is in top, emotionally forthright form as she charts a life passage similar to Pam’s.” For her performance she was nominated for her first BAFTA, second Golden Globe and third Academy Award for Best Supporting Actress.

In 2009, Tomei recorded the role of Mary Magdalene in Thomas Nelson’s audio Bible production The Word of Promise. Tomei was number 18 on the 2009 FHM list of “100 Sexiest Females in the world”.

Tomei grew up in the Midwood neighborhood of Brooklyn. While there, she became captivated by the Broadway shows to which her theater-loving parents took her and was drawn to acting as a career. At Andries Hudde Junior High School, she played Hedy LaRue in a school production of How to Succeed in Business Without Really Trying. After graduating from high school, she attended Boston University for a year.